Since 1986, Canon has also leveraged its semiconductor lithography technology in the development, manufacturing and sale of equipment used in the production of flat-panel displays on large-area substrates. Going forward, the company will continue to pursue both higher-resolution and productivity for Canon flat-panel display lithography systems in order to meet the needs of LCD and OLED display manufacturing.

As Canon celebrates the 50th anniversary of its semiconductor lithography equipment, the company will continue to improve and refine its lithography systems with the aim of contributing to the further development of society.

For more information on Canon’s semiconductor lithography technology, please refer to the appendix below.

Semiconductor Device Technology
Semiconductor chips and devices are incorporated into smartphones, personal computers, digital cameras and other everyday items we rely on. As we enter the age of the Internet of Things (IoT), in which a multitude of items are connected, semiconductor devices such as sensors and communication devices are becoming increasingly important. Whether integrated into cars, home appliances or artificial intelligence (AI) systems used for big data analysis, semiconductor technology is more essential than ever to society and demand for semiconductor devices continues to increase. 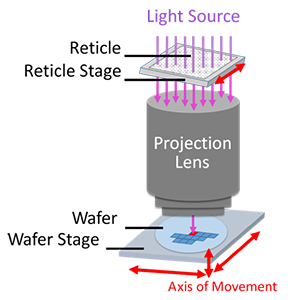 1  PPC stands for “Projection Print Camera.” When released, the PPC-1 was referred to as a semiconductor printing device, not an exposure device.
2 A semiconductor exposure system using a mercury lamp light source for i-line wavelength (365 nm) exposure. One nanometre (nm) is one-billionth of a metre.
3 A semiconductor exposure system using laser light generated from krypton (Kr) gas and fluorine (F) gas for KrF wavelength (248 nm) exposure.
4 The common name for the SI unit micrometre. One micrometre is one-millionth of a metre.
5 Packaging protects delicate IC chips from the external environment while enabling electrical connection and communication with the external chips and devices.
6 Nanoimprint lithography involves pressing a mask (mold) directly into the resist on a wafer like a stamp. Circuit patterns including free-form structures on the mask can be precisely transferred with higher resolution in comparison to conventional optical lithography equipment.
7 One micrometre is one-millionth of a metre. One nanometre is one-billionth of a metre.